Smt. Pratibha Devisingh Patil was born on December 19, 1934 in Nadgaon village of Jalgaon District, Maharashtra.
Smt.  Patil assumed office as the 12th President of India on July 25, 2007.  She was the first woman to be elected to this august office.
Immediately prior to her election as the President of India, Smt. Patil was the Governor of Rajasthan from November 8, 2004 till June 21, 2007. 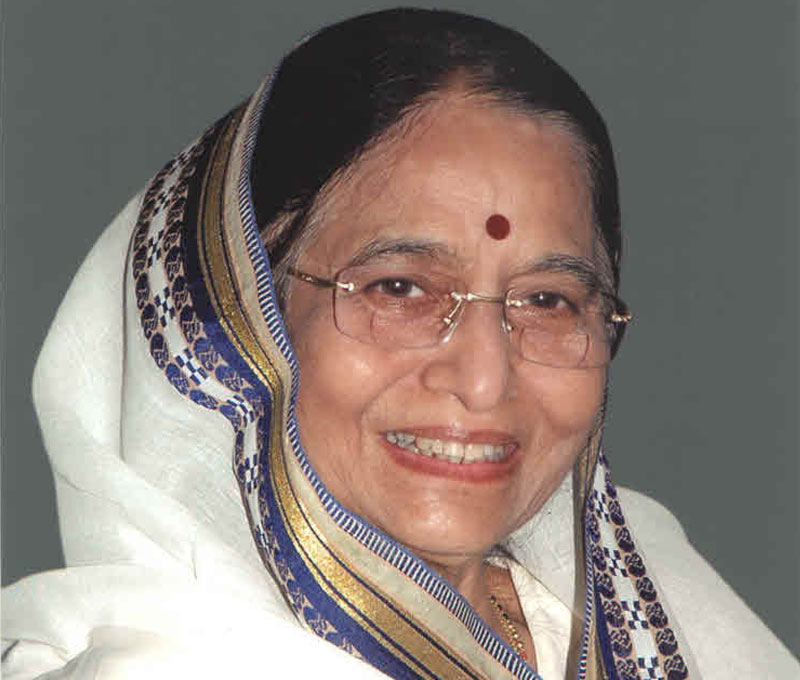 Smt. Patil received her early education from RR Vidyalaya, Jalgaon and later obtained her Master’s degree in Political Science and Economics from the Mooljee Jetha College, Jalgaon. Later, she obtained the degree of Bachelor of Laws (LL.B.) from Government  Law College, Bombay (Mumbai). While in college, she took active part in sports, excelled in table tennis and won several shields at various Inter-collegiate tournaments. Even as an MLA, she pursued her studies as a law student.

Smt. Patil started her professional career as a practicing lawyer at the Jalgaon District Court and simultaneously devoted herself to various social activities, especially, for the upliftment of  poor women.

At the young age of 27 years, she successfully contested her first election to the Maharashtra State Legislature from the Jalgaon Assembly constituency.  Subsequently she was continuously elected four  times as MLA from the Edlabad (Muktai Nagar) constituency  till 1985. Thereafter, she served as a Member of Parliament in the Rajya Sabha from 1985 to 1990 and  later  got elected as a Member of Parliament to the 10th Lok Sabha in the 1991 General Elections from the Amravati constituency.  She enjoys the unique distinction of not having lost a single election that she contested till date.

Smt. Pratibha Devisingh Patil has held various positions both in the Government and in the Legislative Assembly of Maharashtra during in her long stint in Maharashtra politics.

After a fruitful career at the Maharashtra State level, Mrs. Patil move to the Union Parliament and was members of the both the Rajya Sabha and Lok Sabha. She held various positions at the parliamentary level as mentioned below and also served as the Chairperson, Rajya Sabha from 25.7.1987 to 2.9.1987 when Dr. R. Venkataraman got elected as President of India.

In her long public life, she has been associated with several institutions in wide ranging capacities.  She served as Chairperson, Maharashtra State Water Pollution Control Board from 1982 to 1985. She was also the President, Maharashtra Pradesh Congress Committee (PCC) from 1988 to 1990.  Besides holding the position of Director and Vice-Chairperson, National Federation of Urban Cooperative Banks and Credit Societies, she also served as Member, Governing Council, National Cooperative Union of India and Chairperson, 20-Point Programme Implementation Committee, Government of Maharashtra.

Smt. Patil has represented India in various international fora.  She attended the International Council on Social Welfare conferences at Nairobi and at Puerto Rico.  She was a Member of the AICC(I)  delegation to Bulgaria in 1985 and represented as Member, Commonwealth Presiding Officers Conference in London in 1988. She led the Indian delegation to the Conference on the ‘Status of Women’ in Austria and was a delegate at the World Women’s Conference,  Beijing, China in September 1995.

Through out her public life, Smt. Patil has worked actively for the welfare of women and children and the underprivileged sections of society. For their benefit, she established several institutions for them.  To name a few, she  had set up  (i) hostels for working women in Mumbai and Delhi, (ii) an Engineering College at Jalgaon for rural youth, (iii) a Charitable Trust which takes part in multifarious welfare activities for development of women, (iv) an Industrial Training School for the visually handicapped in Jalgaon, (v) schools for poor children of Vimukta Jatis (Nomadic Tribes) and for children of Backward Classes in Amravati District and (vi) a Krishi Vigyan Kendra  (Farmers’ Training Centre) at Amravati, Maharashtra.  She played a pioneering role in setting up the Mahila Vikas Mahamandal, a Maharashtra State Government undertaking for the development of women.

She was instrumental in organizing music, computer and sewing classes for the poor and needy women at Amravati, Maharashtra.   Smt. Patil also organized the Women’s Home Guard in Jalgaon District and was their Commandant in 1962.

Smt. Patil is married to Dr. Devisingh Ramsingh Shekhawat. Dr. Shekhawat obtained his Ph.D. in the discipline of Chemistry from Haffkine Institute, Mumbai.  An educationist and a social worker in his own right, he became the first Mayor of Amravati Municipal Corporation and he has also represented Amravati constituency as its MLA. She has two children, a daughter, Smt. Jyoti Rathore and a son, Shri Rajendra Singh.